Fleet Street runs parallel to the Thames, one of the main thoroughfares of London. City workers, tourists and red buses make their way along it, overlooked by tall buildings that betray hints of the street’s past. Today it is a centre of investment banking, accountancy and law. A passage running perpendicular leads to the 12th century ‘Temple Church’, best known for its affiliation with the legal profession, surrounded by courtyards and legal chambers. 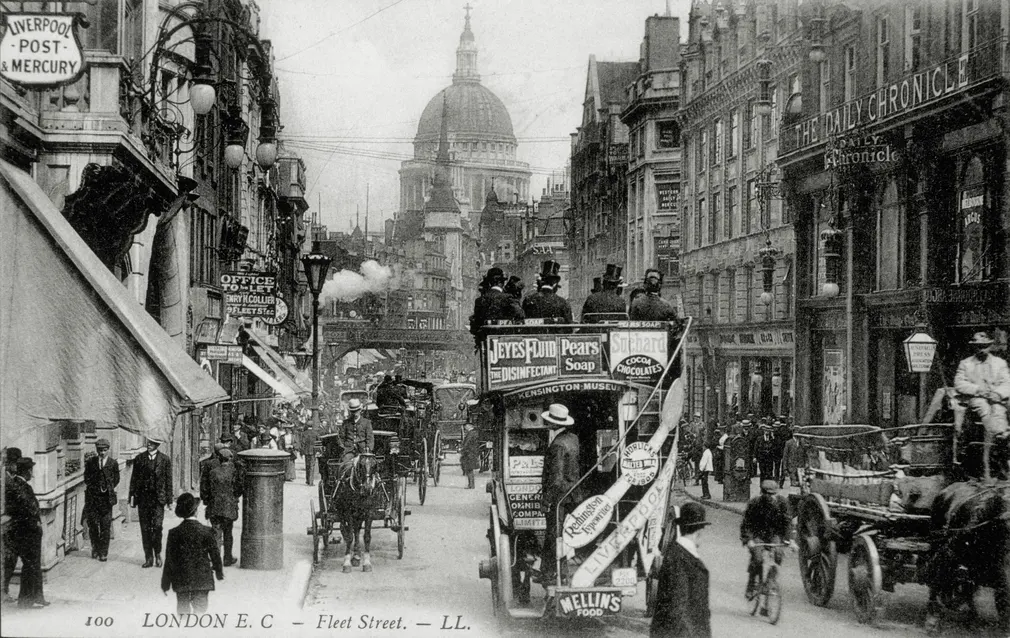 Several centuries ago, however, Fleet Street staked its claim as the home of British journalism, and over the years nurtured the profession. Today it has almost disappeared from it.

The origin of modern journalism could be seen to be small, relatively inexpensive books, known as ‘pamphlets’. Literally meaning a ‘small book’, they became a popular form of political discussion, propaganda and, eventually, a means to spread news. They were typically between eight and ninety-six pages, and were written to promulgate an array of views. As they became increasingly accessible and more widely circulated, the concept of ‘pamphlet wars’ arose, a form of debate that took place across the pages of these books. Between 1600 and 1715, a turbulent time of civil war, revolution and social change, over 2200 different pamphlets were published.

The popularity of pamphlets was possible through increased literacy, and cheap printing. The importation of the printing press was instrumental in both.

William Caxton first saw the printing industry in Cologne, while travelling around Germany for business. Upon returning to England in 1476, he had set up a printing press in Westminster, the centre of London. The first thing he published was an edition of The Canterbury Tales, later followed by translations of texts like Aesop’s fables. There was significant demand for his publications, and it was his apprentice Wynkyn de Worde who set up the first printing press in Fleet Street, around 1500.

Himself an immigrant from Germany, de Worde is credited with opening up printed text to the mass market. Although, like Caxton, he was somewhat dependent on wealthy patrons, he published a huge range of literature, producing copies of everything from romantic novels to religious texts, children’s books to guides to latin grammar.

From the outset, one of the main texts that had been printed was the Bible; Gutenberg’s (who originally introduced printing to Europe) Bibles sold for thirty Florins each which, although three years of the average worker’s wages, were significantly cheaper than hand copied manuscripts.

De Worde’s business continued to make books and literacy more accessible to the people. This was especially significant during the rapid change and lively debate of the Reformation which was transforming Europe at the time.

Although Gutenberg invented the press about forty years before Martin Luther was even born, the spread of printing coincided with and, arguably, accelerated the changes of the Reformation. As discussion took place and ideas were disseminated across countries and the continent, literature became increasingly important. By 1517, the start of the reformation, there was printing technology in over 200 European cities. Henry VIII, a notable example, wrote extensively, mainly in an attempt to justify his divorce and break with Rome. This was part of a larger trend where thinkers increasingly recognised the power of literature to sway opinion and promulgate their ideas. The origins of journalism were also the origins of propaganda.

Nearly thirty years after Henry’s break with Rome, this written discussion had recognisibly taken the form of pamphlets. Around the same time, written text was also being used to spread news. Eventually all these factors coalesced: in 1562 pamphlets reported on England sending forces to aid the French Huguenots. 1562 was at the outbreak of the French Wars of Religion, a prolonged conflict between French Catholics and Huguenots – French Protestants. A medium which had contributed to the Reformation had now developed to report on its aftermath.

Pamphlets quickly consolidated their role in the discursive sphere. An interesting example of the discussion going on during some of the ‘pamphlet wars’ was the controversial writing of Emilia Lanier. Writing during Elizabeth I’s reign, she was best known for ‘Eve’s Apology in Defense of Women’, in which she joined the discussion around the role of women, arguing against the idea that Eve was responsible for the fall of man. She was also the first female English poet, and can be viewed as an early Feminist. Although it was highly unusual for a woman to publish, the printing press afforded her a platform.

The role of pamphlets reached a turning point during the English Civil War, during the 1640s. In the immense political polarisation and almost unprecedented debate of the time, pamphlets were integral to this discussion. This only increased with the breakdown of government control and restrictions on the press during the civil war, which broadly lasted until the restoration of the monarchy in 1660. The over 300 publications which quickly came into being reflected the fragmented opinion of the time, and were used as propaganda on both sides of the civil war.

Pamphlets also, however, found a role in reportage. Although the first English newspaper – ‘Weekly Newes’ – had been introduced in 1622, this was not daily, and the dissemination of news was relatively slow. However, the (inconclusive) outcome of the Battle of Edgehill between Royalist and Parliamentary forces, which took place on the 23rd October 1642 was reported in pamphlets just two days later. This was a significant example of the increasing rapidity with which news could be circulated. News was becoming accessible.

Before long, the hunger for news brought the first daily newspapers, which some historians say irreversibly affected our perception of time. The Daily Courant was first published by Elizabeth Mallet in Fleet Street on the 11th March 1702. It was initially committed only to foreign news (which gave it more freedom from state censorship) and claimed to present only facts without editorial comment or opinion.

However, the news was avidly discussed by those in coffee houses – of which there were many – nearby. They were intellectual hubs and newspapers were often supplied by the owners. This naturally fed debate and (rowdy) discussion. (More information can be found in my article, ‘A Brief History of Coffee’.) A particular coffee house was often associated with a certain trade or profession – in Fleet Street, which was notable not only for its printing industry but also for its taverns and coffee houses, journalists would seize the opportunity to collect stories. Today two of its old coffee houses survive.

News was becoming more accessible, and journalism was shaping itself as an industry. Despite new taxes which the government began to levy on the industry in the 1700s, the sale of newspapers continued to rise. In 1767 11,300,980 copies were sold, 2 million more than in 1760. Although many new publications did not survive long enough to establish themselves (this was particularly the case during the civil war), in 1776 there were 53 different newspapers in London alone.

Taxes were used as a form of censorship, in the hope that it would reduce the circulation of negative rumours or opinion about the government. In theory this pushed the price of newspapers beyond the reach of most of the population, but in reality by the 1830s there were huge numbers of illegal, untaxed newspapers. These were often distinctly revolutionary, and it proved incredibly difficult for the authorities to suppress them.

Peele’s coffee house, situated on Fleet Street and frequented by people like Samuel Johnson (who published the first English dictionary), was closely connected with the campaign to abolish these taxes. ‘A tax on paper is a tax on knowledge’, was one of the slogans of the time, and it was surrounded by widespread campaigns for social change. The committee room of the ‘Society for Repealing the Paper Duty’ was situated in Peele’s coffee house until the campaign’s success in 1861. This was part of the changes that made newspapers (and knowledge) more accessible and the ‘penny press’ (papers that could be bought for a penny) took off in the 1880s.

The Daily Mail, targeted at the ‘ordinary’ person, was established in 1896, and it found immense success. Featuring lively journalism, bold headlines and plenty of illustrations. Aimed at the ‘newly literate, lower-middle classes’, it was part of a wider trend which sought to increase the target audience of newspapers.This continued into the 20th century, and by 1947 two similar newspapers – The Daily Express and the Daily Mirror – each had a readership of 4 million.

These newspapers all had their offices in Fleet Street, which had firmly established itself as the centre of British journalism. The industry was rapidly changing with the introduction of the telegram, which meant that news could be communicated across the world faster than ever before, and newspapers could be efficiently distributed across the country with the growing railway network. The increasingly international nature of journalism culminated in the establishment of Reuters in 1851. They used pigeons and telegrams to, according to the Encyclopedia Britannica, ‘report on stories of international importance’. In 1865 it was the first to report to Europe Abraham Lincoln’s assasination, and in 1923 its offices moved near Fleet Street.

Newspapers arguably reached their peak significance during WW1, with a stream of urgent and newsworthy information descending onto the pages. This was also a period of rapid social change which reshaped the very structure of society; this was reflected by the emergence of papers like the Daily Herald which, founded in 1912, was dedicated to the trade union and labour movement.

Fleet Street had become synonymous with the newspaper industry and journalism, and this remained the case throughout the 20th century. To work there was the highest aspiration for most journalists. However, with changes in the industry, this was to be the case no longer. In 1986 Rupert Murdoch, proprietor of an array of newspapers, controversially moved his offices from Fleet Street to Wapping, East London. With the high rent prices of central London, he believed it was impossible to profitably continue in the traditional home of journalism.

This decision was met with violent protests in both the old and the new locations. Nevertheless, other publications soon followed suit.

Reuters was the last major news outlet to leave in 2005, establishing new offices in Canary Wharf instead. The last journalists departed the street in 2016, with the Sunday Post.

Journalism is a changing industry. Physical sales of the Guardian and Daily Mirror, for example, fell by over 50% between 2010 and 2019, as readers increasingly sought their news online. However, in 2019 the distribution of free papers like the Metro and Evening Standard was continuing to increase, and until the pandemic, the Metro was the most widely read of all the country’s newspapers. Perhaps accelerated by the sustained lockdown, news, like so many aspects of life, is increasingly digitised.

Nevertheless it is usually possible to pick up a free newspaper in one of the tube stations near Fleet Street. Blue plaques adorn the sides of its buildings, commemorating their journalistic heritage. St Bride’s – known as the ‘journalists’ church’ – offers an exhibition about the street’s history in its crypt. But life – and the street – continues to change, and that’s what makes it worth reporting on.