1975 was the beginning of the Khmer Rouge reign. For the people of Cambodia, this was a notion of hope. The toils of the five-year civil war, culprit to 300,000 tombs, quenched the lands with death and the people were desperate for some kind of resolution, in any form. However, with the Lon Nol army defeated and the Khmer Rouge sovereign, a genocide casted straight from hell was about to begin. On April 17th, a loudspeaker announced that all Phenom Penh civilians were to evacuate within 24 hours in order to maintain safety from the American bombings. It was declared the evacuation would only last for three days- in reality, citizens wouldn’t return for over three years. If anyone refused, was too slow, disabled or elderly, they would be shot by a Khmer Rouge soldier. After the eviction, two million Phenom Pehh residents found themselves on a death march, including hospital patients, emptied from their beds and prescribed the torrentuos walk out of the city and into the countryside, all to become caricatures of the Cambodian peasantry image(essentially unpaid farming labour). The idea was that the Capital and the other cities in Cambodia would reform to rural and agricultural cities where the elites of society and wealthy merchant no longer held dominance and influence. This was the widespread vision for Cambodia, and until secure, foreign goods, people, and influence was to be abstained from. Year zero was meant to be the revitalisation of Cambodia, led by working people towards an agricultural utopia.

‘It is better to be arrest ten people by mistake than to let one guilty person go free.’

One day you find yourself forgetting to water the plants. The next you’re on a truck to S-21. This is not an exaggeration, prisoners could’ve committed ‘crimes’ of extreme minimality and still be subject to the brutal torture and interrogations so notorious of S-21. Chao Ponhea Yat high school, christened S-21 or Tuol Sleng under the Khmer Rouge, was transformed from a school into the venue of death for approximately 18 063 men, women and children from its initiation in 1976 after the Khmer Rouge seige until 1979, the year the government fell.  S-21 is infamous for its complete inhumanity and blatant sadism. Even the Khmer Rouge guards were not exempt from the torture, easily being thrown into the cell for simply planning to fall asleep on duty or, rather ironically, beating a prisoner to death without permission. After arriving at S-21 blindfolded, a person would have an average survival rate of 0.06%. Once photographed, prisoners would be sent to incessant interrogations- until a whole life story had been spewed and the subject had admitted to the most absurd allegations, librarians alleged CIA agents.  Angka (the enigma to describe Pol Pot and his government) were extremely paranoid about anyone who defied the extreme agrarian ideology; basically, anyone who wasn’t a poor farmer.  The prisoners would then be either shackled to in acute makeshift cell in the former classrooms:

Or would be shackled to eachother in a crowded room like some sick conga: 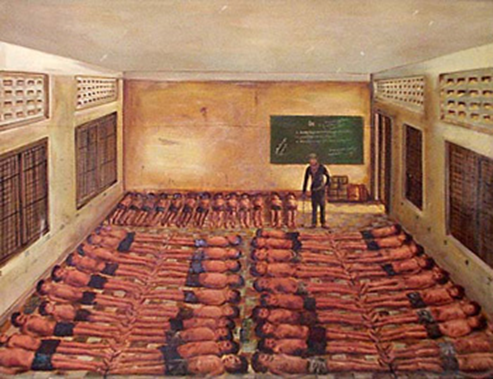 To even move, permission had to be granted. Prisoners were fed a few tablespoons of rice every twelve hours and the only water given to them was through a hose sprayed every three or four days into cell. The painting above is by Vann Nath. He was one of the few of the prisoners to come out of S-21 alive. Because of his artistic skill, Nath was stipulated to produce Khmer Rouge propaganda, saving his life.

The faces of the victims

Over 5,000 photographs of inmates at S-21 have been archived and are accessible via this link: https://gsp.yale.edu/cgp/gallery/cts

If you hadn’t died from starvation, dehydration, torture or accidentally twitching then you would have been thrown into a truck and driven the 14 kilometres to Choeung Ek- the biggest killing field of the whole Cambodian genocide. A flock of prisoners would be huddled into pre-dug pits and shot.

For a high fee, there’s a once-in-a-lifetime chance of shooting an AK-47 at the Choeung Ek site, mimicking the role of a Khmer Rouge Soldier, as if the Cambodian Genocide was just some videogame. There are even live targets: cows, sheep and pigs all available for a good fee. The profit from this perverse simulator doesn’t even benefit the locals, instead of going to the Cambodian government, and then consequently to the Army. Personally, I don’t see how sick, violent roleplay educates a person on the history of the genocide. Instead, it fuels a disgusting thrill humans get from being exposed to grotesqueness, a glee at the sadism and barbarity and the power the re-enactment brings. 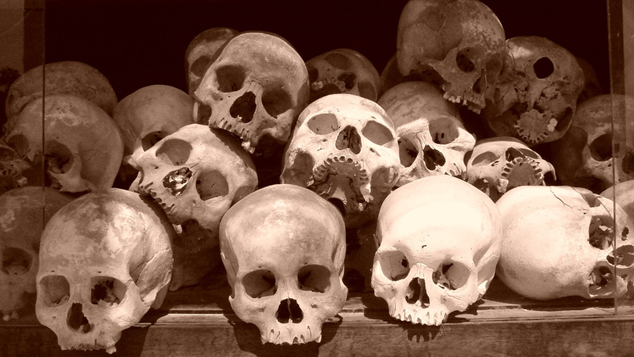