The reality show “Big Brother Brasil” is one of the most famous programs in the country, being watched by millions of people since its debut in 2002. This season, competing for R$1.5 million, eighteen contestants (with other two contestants being added afterwards by popular vote), were in a lockdown without knowing what was happening in the “exterior world” (with some exceptions, like the news about the COVID-19 pandemic). This year’s edition started on January 21st, the cast consisted of two ‘groups’: influencers and regular people. Similar to a George Orwell’s book or a Black Mirror episode, the audience watches the contestants’ actions for 24 hours a day, subjecting them to criticism, something that they will have to deal with after they leave the show and can impact them for the rest of their lives. Even though “Big Brother” exists in other countries, it doesn’t have the same backlash as the Brazilian version: in one of evictions of the 20th edition, the show lured 1.5 billion of votes, breaking a world record and officially getting a place  in the Guinness Record Book. The social distancing during the Coronavirus’ quarantine helped this achievement for “Big Brother Brasil”, since soccer matches, championships and other forms of entertainment were cancelled to avoid the spread of the virus in Brazilian territory, making people cheer for the program as a way of distraction. Although it doesn’t seem possible, this reality show can bring reflections about the Brazilian society, serving as a “sociological laboratory”, since the edition of 2020 brought a lot of important topics to the Brazilian mainstream: 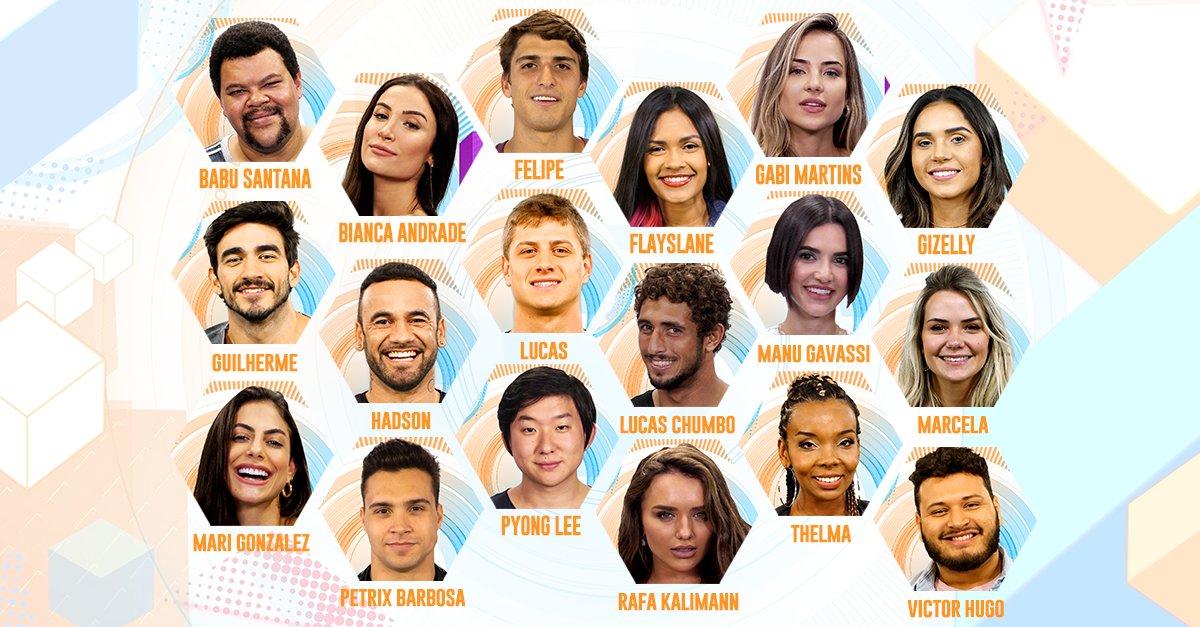 Petrix Barbosa, a Brazilian Olympic gymnast, was invited to be a contestant of the show. In 2018, the athlete accused the coach Fernando de Carvalho Ramos of sexually harassing him ,when Petrix was only a 10-year-old, being one of the 41 alleged victims of Fernando.  Even though he was a victim of abuse, Petrix was accused by viewers of sexually harassing Bianca Andrade, a ‘youtuber’ and a businesswoman. He was also accused of sexually harassing Flayslane Raiane, a rising singer, during a party on “Big Brother” using the excuse of it all being just a joke. The audience got mad when the gymnast touched Bianca’s breasts and leaned his private parts on Flayslane’s head when both of the women were drunk. The viewers asked for his expulsion of the show, but Petrix was only evicted by popular vote. According to  the psychologist Manuela Xavier, these actions are caused by the underdevelopment of male victims’ trauma, making that toxic masculinity grown inside them as a form of protection, because being harassed by a male could make a straight boy need to ensure his heterosexuality in a harmful way for others.

In 2014, it was registered in Brazil a daily average of 13 cases of sexual abuse on young boys, but it’s underreported because most of the victims are too embarrassed to speak up about it. Unfortunately, boys are victims of sexism too, growing up learning that they shouldn’t cry because that is something real men don’t do and how a real ‘macho’ should act like. In a study by Mery Pureza Candido de Oliveira, sexual abuse in males’ childhood can be related to ‘the repetition and the serious nature of sexually aggressive behavior’ afterwards. Fortunately, the SUS (Brazilian National Health Service) offers to people who were sexually assaulted free medicines (anti-AIDS cocktail and morning-after pill, for example), treatment for the injuries and psychological care, but this medical reception is not widely known by the population.

Bianca and Flayslane weren’t only victims of sexual harassment by Petrix to the public. A lot of people reported that they, together with the gynecologist Marcela McGowan, suffered unwanted sexual advances by another contestant of the show during a party: Pyong Lee, a hypnotist and ‘youtuber’. He attempted to kiss Marcela and Bianca several times (while Marcela asked him to stop) and he also touched Flay’s butt cheeks. This situation had a huge backlash, since he is married and has a newborn outside of the show. Not only was Pyong accused as a harasser, but as a harassment victim as well: in the same party, the architect Felipe Prior (who is being accused of raping three women outside of the show) kissed Pyong Lee when the hypnotist was asleep. It didn’t have the same backlash than the other cases, since it happened between two males. Both Petrix and Pyong had to testify to the Civil Police, after their evictions of the show.

All of the alleged cases of sexual harassment on “Big Brother” happened at parties, when the victims were drunk. According to a research by Instituto Avon and Data Popular, 27% of male university students believe that if a girl drinks too much, abusing her is not a type of violence. The idea of sexual harassment being the victims’ fault was also shown in a commentary of the contestant of Big Brother 20: the actor Babu Santana said that Bianca Andrade shouldn’t complain about being harassed because of the way she dances. The normalization of sexual harassment is an issue that Brazil has to fix: by doing so, an increased number of women and men wouldn’t have to deal with this kind of trauma for the rest of their lives.

In the very first week, some of the men of the house got together and orchestrated a plan: tar the image of the taken female contestants, so the girls could be evicted from the show and get hate and rejection from the audience. The main idea was to get the digital influencer Mari Gonzalez to cheat on her boyfriend, who was a contestant on the season 12 of “Big Brother Brazil”, with the physiotherapist Lucas Gallina. Even though Gallina also had a girlfriend outside of the show, he agreed to be part of the scheme to destroy Mari’s reputation. The sexism in the concept of targeting females to be judged and hated by the public is undeniable: Lucas was also in a relationship, why would only Mari deserve to suffer backlash from the public?

The contestant Hadson Nery, an ex-soccer player, ended up telling two women about the plan: Marcela McGowan and the lawyer Gizelly Bicalho, hoping they would like to join the males’ scheme. Marcela and Gizelly weren’t famous, just two regular people who were isolated and started to befriend each other. The duo were horrified by the idea of destroying a woman’s reputation, but they were too afraid of the other female participants thinking that they would be lying if they speak up. After some time discussing the pros and cons, they decided to tell the other girls about what they heard. All of the girls got together, one of the most emblematic moments in the show, and confronted Hadson, Marcela and Gizelly’s using his own words against him. Of course, Gizelly and Marcela were discredited, because some of the people chose to believe that they were lying or just understood what Hadson said wrongly, like Bianca Andrade, who preferred to stay in the guys’ side and defended them. The own host of “Big Brother”, Tiago Leifert, lied when the show was live on TV (that is when more people are watching), saying that the “boys” were only bluffing to destabilize the competitors, but a couple days later, after the backlash from the audience, he reconsidered and said that the plan was real.

After the singer and actress Manu Gavassi, one of the contestants, told the participant Felipe Prior that she was voting on him because of a ‘sorority’ matter, meaning that it was because she was defending other women, the searches for that word on Google increased 250% in Brazil.

In parallel to Mari Gonzalez, 31.1% of reports to the Centre for Special Attention to Women are of psychological violence and 6.51% are of moral violence.

The male model Guilherme Napolitano, at first, is probably the dream of almost every girl: sweet, cute and a gentleman. Inside of the show, he started a relationship with the singer Gabi Martins, an innocent and shy girl. Apparently, they were the perfect couple. However, the viewers realized that it wasn’t a really healthy relationship: Guilherme, while dating Gabi, always flirted with Bianca, something that Gabi noticed and which hurt her feelings. But infidelity was not the reason why people thought that their relationship was unhealthy and abusive: he showed aggressive behavior towards Gabi, mocking her; Guilherme didn’t accept that his girlfriend was having fun with the people that he didn’t like; and he even said that it was her fault he was evicted,and not his own.

All of these behaviors made Gabi have emotionally unstable moments, crying multiple times. Most of the abusive relationships are not noticed by the victim, because after being belittled, their abuser always flatters them to minimize the consequences. The “gaslight”, which is ‘manipulate someone by psychological means into questioning their sanity’, is one of the main evidences of a toxic relationship.

According to IPEA, 65% of people believe that a woman that suffers with an aggressive relationship and doesn’t leave the abuser actually likes to be beaten.

The “Big Brother 20” had only two black contestants: the actor Babu Santana and the anesthesiologist Thelma Assis. Babu’s afro comb got mocked by the model Ivy Moraes, who also said that Thelma and he didn’t suffer any kind of racism inside of the show. Most of the time, Ivy voted for the two to be evicted from “Big Brother”. Babu was called a “monster” multiple times by the other contestants, only because he was assertive and sometimes rude in the way he spoke, while the fellow white contestants with the same behavior didn’t have the same backlash. That reflects the part of Brazilian society that views black people as dangerous, since as an actor, most of Babu’s characters were criminals.

Thelma, a doctor and a samba dancer, came from a humble origin. Her family had to give up a lot of things to pay for her studies, so she could fulfill the dream of graduating in Medicine. She was the only black student of the whole university. According to IBGE, only 18.3% of young people that have a Higher Education degree are black.

A commentary made by Manu Gavassi was pretty controversial: while talking to Marcela and the actor Daniel Lenhardt, who were dating on the show, she said that they were a “strong” couple because their skin color-matched and that made them pleasant to look at. Daniel and Marcela are both light-skinned and blonde. This statement caused a repercussion outside of “Big Brother Brasil”, many people accused Gavassi of being eugenicist. It’s undeniable the mix of races (indigenous, European, African, Asian…) that forms the Brazilian people, but most of the population doesn’t know that in the 20th Century, under the leadership of the pharmacist Renato Kehl, eugenicist ideas were implanted in Brazil, with some of them being against the Japanese migration and blaming the Black people that were newly released from slavery by the Brazilian epidemics. Great Brazilian intellectuals, like the writer Monteiro Lobato, were supporters of eugenics. In 2018, the current vice-president of Brazil, Hamilton Mourão, proudly said: “My grandson is a good-looking guy, right? Whitening of race”, what makes clear that these eugenics ideals still in people’s minds nowadays, but in a subliminal and subconscious way.

Even though “Big Brother Brasil” is only a reality show with the sole purpose of entertainment, the topics that it brought to TV are very necessary and deep. On a small scale, the daily Brazilian issues are exposed to the light in an unexpected way: through the lens of the cameras.